Crispy roasted potatoes are one of those dishes that can be quite elusive until you have a few cooking tricks under your belt.

Today I’ll show you the best method I know to roast really crispy potatoes, AKA the best roast potatoes.

What makes the perfect roast potatoes?

My perfect roast potatoes come from a two-step method. I actually learnt this method from my host mother in South Africa when I was on student exchange as a 17 year old.

I’ve tweaked my lovely host mom’s method to use my steam oven, so it’s not exactly identical. But the principle is the same. She did not have a steam oven, and probably to this day doesn’t even know what one is, but she made the best roast potatoes I have ever eaten in my life.

Happily, with my steam oven, I’ve been able to recreate her potatoes much more easily and with really predictable results.

Steaming and then roasting.

Oh, and plenty of fat.

That’s three secrets, isn’t it? Never mind. Just know that these are going to be the perfect roast potatoes. The ones that everyone you know talks about and asks for.

How to Roast Pumpkin in a Steam Oven

How to Roast Peppers in a Steam Oven

How to Roast Turkey in a Steam Oven

Why steam potatoes if you’re just going to roast them afterwards?

When you roast a potato, steaming it first cooks the starches and gives you a really fluffy interior.

Steaming also means you’re pre-cooking the potato, making the edges soft and expanding the surface area for maximum crispiness. The slightly crumbly, imperfect edges on your already-soft potatoes soak up all the fat you toss them in and turn super crispy in the oven.

Tips for the best roast potatoes

How small should I cut potatoes for roasting?

For a good balance between fluffy insides and crunchy roasted outsides, I like to cut my potatoes into pieces about 1 ½ inches (4cm) diameter.

Do I need to peel potatoes before roasting them?

Nope! Peeling, or not, is totally up to you. I don’t usually peel because I really enjoy the texture difference between the skin and the flesh. The skins will crisp up nicely during roasting, but won’t ever get as crunchy as the cut flesh of the potatoes. So if maximum crunch is what you’re after then peeling is the way to go.

Would you like my FREE Quick Start Guide to Your Steam Oven?
Start learning what (and how!) to cook using your oven’s steam and combi steam settings, with my instant downloadable guidebook, full of tips, links and ideas.
Click here to get the Guide sent straight to your inbox

Can I boil potatoes for roasting instead of steaming them?

Sure. I steam them because I have a steam oven and it means I can do the entire dish using one pan and one appliance. But if you’d prefer to boil your potatoes then go ahead. Potatoes cut into roughly 1 ½ inch pieces (4cm) take about 12 minutes to par-boil.

The key to boiling, if you do it, is to make sure you drain the potatoes very well and let the excess moisture evaporate. You can do that by putting the drained potatoes back into the pot and carefully tossing them over a low heat to cook out excess water. This will roughen the edges at the same time, which is a bonus.

What is the best fat to use for crispy roasted potatoes?

I most often use olive oil, because I have it on hand and it makes lovely crunchy potatoes. If I’m making crispy roasted potatoes for a special occasion I’ll use duck fat for a deep savory flavor and glassy crunch.

If you’d like to try another kind of oil, coconut oil also works well. I don’t love the taste but plenty of people do!

When should I salt my potatoes for roasting?

This is a little contentious. If you’re roasting potatoes start-to-finish in the oven, you should always salt them after cooking. This is to avoid drawing out moisture while they cook and making the outer layer leathery. With my steam-then-roast method, the potatoes will have lost a lot of their moisture before the roasting step, so you can salt them when you add the fat. I find this gives a good salty hit to the potato flesh without sacrificing crunchiness.

Do let me know in the comments if you’ve tried my crispy roasted potatoes, and if you enjoyed them! They’re easy once you know the little tricks to make them super crunchy, and you’ll win with just about everyone at the table. 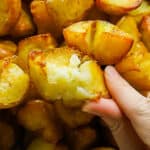