I have a thing about puffy sultanas.

By ‘thing’ I mean I DETEST them. A regular dried up sultana causes me no issue, but cook or soak them in liquid of any sort and they make my skin crawl in the way I imagine some people shudder thinking about nails on a chalkboard.

I’m not sure if this was my first encounter with the puffy sultana but my most vivid recollection of them from my childhood – and the first instance I remember the horror they could inflict – was when my mother made something called savoury mince when I was about five. It was absolutely loaded with the things – squashy little pillows of sweetness tucked into a same-coloured meaty, bubbling mass in her square electric fry pan. There they were, hiding amongst the meat and onions, all ready to explode in your mouth with none of the fun of popping candy and all the creepiness of a slimy bug. Clearly the meal left an impression because I can recall it to this day, along with the teeth-gritting exasperation of my father as I slowly picked my way through dinner, removing every trace of wayward fruit and building a tiny mountain of discards at the edge of my plate.

All of that has almost nothing to do with bread, except for the part where I tell you how much I adore a good fruit loaf. It’s almost cruel, really, because nearly every fruit bread I’ve come across is packed with the dreaded puffy sultana. What to do – try to pick out the offending objects and destroy the enjoyment of a toasted slice? Tell myself they’re actually fine and eat the bread anyway, all the while thinking about how the texture makes me want to gag?

No more, people. Enter Spiced Apricot, Date and Seed Bread, a perfect recipe for your steam oven. It’s all the things I love about a fruit loaf: spicy, heavy but not too much so, loaded with chunky pieces of dried fruit but not a sultana to be seen anywhere. And not at all difficult to mix and form the day before, ready to bake in the steam oven the next morning.

I like the improved flavour and texture of the bread after a slow second rise overnight in the fridge, and that’s what I’ve given instructions for below. If, however, you want to bake this the same day you absolutely can. Do the second rise in your steam oven at 38⁰C after forming the loaf, until it has doubled in size and springs back when pressed gently. It takes about 30-35 minutes when I do this, and then you can go straight from proving to baking without removing the loaf from the oven. Watch the timing when you cook it though – because the dough won’t be as cold at the beginning of baking you’ll be able to knock about 5 minutes off the time.

This is a fine bread in a regular oven, but I’ve always found I have to soak the dried apricots in hot water before I mix up the dough, otherwise they’re hard and too chewy in the baked loaf. And I’ve stuck to that each time I’ve made it in the steam oven too, except this week I made it while the baby was crying and attached to my hip, and the extra step just seemed too hard. Turns out I’ve been boiling the kettle for nothing because the humidity of proving and baking in the steam oven gave almost exactly the same tender, moist apricots I was looking for. Thank goodness for a crying baby (said no one, ever). 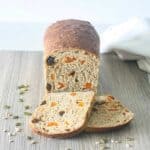 But I don’t have a steam/combi-steam oven! Do everything as per the recipe. When it comes to the first proving step, set your dough aside (covered but not airtight) in a warm place. The time it will take to prove will depend a lot on the temperature of the room you leave it in – most places don’t run at a constant balmy 38⁰C! So you’ll likely find the first prove takes an hour or more to happen, rather than the 30 minutes it takes in a steam oven. Otherwise continue as normal, but add an extra 10-15 minutes to the cooking time.

This post contains affiliate links. For more about these and how they can help this site, go here.