Every year, I see the hot cross buns arrive in the supermarkets just after Christmas. After I get over my initial incredulity at seeing Easter products in DECEMBER, I think, ‘ooh, hot cross buns would be nice’.

A couple of weeks later, I give in and buy a pack. We eat them, then complain about how bad they are and how I should just make my own. Occasionally I make a single batch in response to this before forgetting how easy it was and giving up again.

Not this year, people. This year is different. It’s the year I resolved not to buy a single shop version of the too-lightly-spiced, too sweet, too suspiciously soft (even after three days on the bench), over-fruited or under-fruited Easter buns.

The minimally processed argument is especially valid when it comes to cakes, biscuits and baked goods. We love our treats here and are definitely not no-salt, no-sugar, no-fat subscribers (the brownies coming up in my next post will assure you of that). For the most part, though, I make those treats myself because the versions widely available at shops are AWFUL. Full of preservatives, emulsifiers, fake flavourings and hydrogenated fats. Because of those things, they’re not only more difficult for your body to digest, they also taste almost universally bad. I don’t know about you but if I’m going to consume a bunch of empty kilojoules, I at least want them to be as delicious and as satisfying as they can be.

And that, at last, brings us to today’s recipe.

I thought these would work well cooked on combination steam, and they did. Golden, tender and even-textured, and really really delicious. If you haven’t discovered the steam oven’s affinity with yeasted dough already, they’re the perfect thing to start you off and the effort vs reward is firmly in your favour. You, like me, may never feel the need to buy the inferior supermarket variety again. 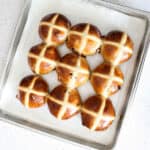