These bacon wrapped sausages are the perfect quick party dish to make when you’re low on time but want something savory, satisfying and meaty for guests.

The first time I made these, my husband and kids vacuumed every single one off the pan before I could even serve them. Then I mentioned to a friend that I was photographing them for the website this week and she asked when she could come by for the leftovers. I think it’s safe to say they’re popular!

I’ve used mini breakfast sausages here and roasted with them with bacon, brown sugar and a hint of cayenne pepper. You can replicate the recipe with full sized sausages, kielbasa or cocktail sausages depending on your preference.

Sausages wrapped in bacon: appetizer, side dish or breakfast?

Bacon wrapped sausages are something I’d recommend as an appetizer or a side dish at a holiday party, but they’re also great if you need to put together a few dishes for a breakfast buffet.

When it comes to breakfast entertaining, this is a way to serve sausages which don’t need to be carefully watched in a frypan, and they take care of the requirements for both bacon and sausage on the table, so that’s one less breakfast dish to worry about! Add some steam oven scrambled eggs, sous vide egg bites or a vegetarian breakfast casserole and you’ll please just about everyone with far less effort than a traditional cooked breakfast.

There are a few things I can recommend when it comes to these sausages which will make yours great from the very first time you try them.

Give these steam oven sausages a go soon and watch them disappear into happy mouths and hungry bellies. 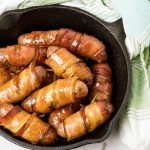