So I know we’ve talked about brownies here before. And for a long while, whenever I made these ones and contemplated writing about them I thought, ‘who really needs another brownie recipe?’. But do you know what? I’ve been making this recipe in one form or another since I was fourteen and still love them, so I obviously need it in my life, and maybe you do too*. Because where the 12-minute version I wrote about previously is dense in a soft, cakey sort of way, uninterrupted by chunky additions and gently nuanced with brown butter (and let’s not forget that salted peanut butter frosting –  now I’m losing my train of thought and wondering why it’s been so long since I made them), today’s recipe is almost its opposite. In brownie terms, anyway.

Fairly heaving with pecans and white chocolate, these have just enough dark, intense batter to bind everything together. They straddle the line between baked good and confection, really. And make no mistake, they are ALL about the chocolate. I think in general if you’re going to eat or cook with chocolate you shouldn’t waste calories on the bad stuff, but particularly so in this case, where there is nothing much to hide behind – not even cocoa to help boost things – and you’ll really notice subpar ingredients.

As for baking brownies in a combi steam oven vs a regular oven, though the latter is completely fine, and I successfully made brownies for years in one, the moisture of the combi steam lends a fudginess you just can’t otherwise get, plus it’s a little more forgiving if you overbake by a minute or two (and who here hasn’t done that to a tray of brownies at least once?! Guilty). Given the option I’ll never go back to a conventional oven for any brownies.

I wish I could give you the origin of the recipe but I have no idea, and it’s been heavily adapted anyway. My first version of it is written in metallic gold pen on the mauve pages of a spiral-bound notebook I used to keep recipes in as a teenager (there’s some good stuff there, people! Although the somewhat incongruous and very nineties cat-in-a-vase photo on the cover is probably not one of them). The edits in the margins are many and include total deletion of a dark chocolate and coffee glaze. Fourteen-year-old me thought it was the best part of the recipe, but my adult tastebuds deem it a bit over the top for richness (I know, really?!), and I can’t be bothered with the effort of making it when the brownies themselves are so good.

In other, sort of related news: I am finally on the Pinterest bandwagon! I’ve had an account linked to this site since I started it but until a couple of weeks ago was only pinning the recipes I posted here. I’ve finally started pinning all sorts of other things from around the web which will work well in a steam or combi steam oven, and I have to say I’m a bit addicted. Late to the party, I know, but it’s the perfect medium for a girl who loves lists and organisation but is generally a visual learner. Anyway, if you’re Pinterest-inclined, hop on over there and follow along. If you haven’t discovered its joys yet, don’t say I didn’t warn you.

*Incidentally, how many brownie recipes IS enough?? I can report that after a lifetime of testing, I have somewhat settled on three go-to versions chosen for different ‘features’. But I could probably be convinced to add another if it were warranted. Send me your best – goodness knows I seem to have no shame when it comes to trying new recipes involving sugar and fat. 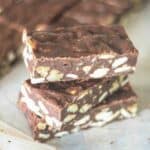 But I don’t have a steam/combi-steam oven! Bake them in a regular oven at 180⁰C for 20-25mins. If you want to approximate something more like the texture of the combi steam version, half fill a shallow dish with boiling water and place it on the bottom rack of your oven when you bake the brownies.

7 thoughts on “Fudge brownies with white chocolate and pecans”