A great loaf of bread is high on many people’s list of combi steam oven recipes to master.

Settle in, because this post is all about baking bread in a steam oven.

Whether it’s a regular sandwich bread, dinner rolls, baguette, brioche or a dense fruit loaf, baking bread in a steam oven gives you a fine, tender crumb and chewy, glossy crust. I promise, even if you aren’t the most confident of bread bakers, a golden, perfectly textured loaf really can be yours with minimum fuss. Hopefully today’s recipe will encourage you to try.

There is a Breads and Yeasted Doughs index page on this site, bursting with combi steam oven recipes like Date, Apricot and Seed Bread, New York Style Bagels, and this diet-defying Monkey Bread. So it’s apparent from the index that I love baking in my combi steam oven, but the most commonly loved loaf, a humble sandwich bread, has so far missed the blog post train.

Let’s fix that oversight, shall we?

Is baking bread in a steam oven really better than a regular oven?

I could explain how to bake bread in a steam oven using many recipe examples, but this honey oat sandwich loaf recipe is my favourite for good reason.

It’s simple to mix up, forgiving in the kneading process and makes a grand, evenly textured soft loaf. A touch of honey gives the barest hint of sweetness and a glorious aroma, while the oats add body, fibre and easier digestion to something which still passes as a white bread in my kids’ eyes.

Baking bread in a combi steam oven definitely has some major perks. The biggest plus is the fantastic texture your loaf will have, but along with that you should find your bread proves and rises evenly. And because the crumb is more moist than when cooked in a conventional oven, it stays fresher for longer.

Proving dough in a steam oven

While we’re on the topic of steam oven bread, I want to touch on the subject of dough proving (or proofing) in a steam oven. It’s something I get asked about a fair bit.

Here are my FAQ’s about using a steam oven to prove your dough:

Can I prove dough in my steam oven?

Yes, you can prove dough in your steam oven. It’s quick, even and keeps the dough nice and moist – basically the perfect environment for all those little yeast microbes to do their thing.

How long should I prove my dough in the steam oven?

The quantity of dough in today’s recipe (that is, one large loaf or two smaller ones) takes around 30 minutes proving at 35°C/95°F to double in size for the first (bulk) prove, and similar for the second (formed loaf) prove.

Be very watchful of the second prove for sugary doughs such as brioche, fruit loaves or babka. I have had more than one overflowing bread tin in my steam oven thanks to a fast-rising and consequently over-proved sweet bread dough!

What temperature should I prove my dough at?

That’s a bit variable (see below point). My steam oven won’t let me select a temperature below 35°C (95°F), but I’d prefer to prove at about 25-28°C for the best balance between quick rising and flavour. If you can select within that range, go for it.

Essentially, the warmer your oven the faster the dough will prove. Whatever you do, don’t go above 42°C/107-108°F, as this is when your yeast will begin to overheat and die rather than multiply.

Do I need to cover dough when proving it in a steam oven? Nope. The humidity in the oven cavity means you can just pop the bowl or tray straight in.

There’s an elephant in the room here. Unfortunately, bread proved at warm temperatures doesn’t actually have the best flavor or texture. For that, you’ll want to prove slowly in a much cooler environment. A refrigerator is ideal for slow proving and great flavor.

Everyone is different but I’ve found what works best for me is to do the first prove in my steam oven, then form my loaves or rolls and prove them overnight in the fridge.

This means I can get my dough made, proved and formed in an afternoon or evening, and I bake the next morning for a fresh loaf to make the day’s sandwiches. All the fresh bread, far less immediate effort!

If I really want to bake the same day, I do the first prove in my steam oven, form my loaf and do the final prove, covered on the bench, for around an hour and a half (my kitchen is generally around 20°C/68°F in the cooler months, you’ll need to adjust your final prove timing depending on your room temperature). 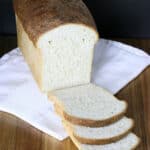 Although it contains honey, this is not at all a sweet loaf. The honey gives a lovely aroma, and feeds the yeast. The oats break down almost completely but they give a nice toasty, nutty flavour without the nubbly texture of whole grains or whole wheat flour, neither of which my kids are keen on (sadly for me, as I love whole grains in bread). Oats are also more easily tolerated by the digestive system than modern wheat, so I like to use them wherever I can. This makes one large loaf as shown or two smaller ones (I use one of these fantastic sturdy loaf pans but if you don’t have one that big just use two smaller/regular sized pans). I mix and knead my bread dough in a KitchenAid mixer, so that’s how I’ve written the recipe. You can certainly do it by hand if that’s your preference. You’ll want to knead the dough by hand for 5-7 minutes after bringing it together in the bowl.

So there you have it, combi steam oven bread! I hope this post is useful for any bread recipe you’d like to try making in your steam oven. Just follow the principles given and you’ll be well on your way to the best loaves you’ve ever made.

If you’d like more Steam and Bake recipes and steam oven inspiration, sign up for the mailing list right here. No excessive emails, just an message every now and then to tell you the latest. Plus, you’ll get access to the exclusive subscribers-only Combi Steam Cooking Facebook group. It’s full of people at all stages of learning about combi steam cooking, and I’m in there answering your questions, posting videos, tips and cooking inspiration.

And if you’re after more delicious combi steam baking recipes, the Index page has plenty. If oats are your thing, have a look at the combi steam oven Apple Cinnamon Oatmeal Muffins video, or if you’d like something delicious to spread on your fresh bread, mix up a batch of Pea and Broad Bean Crostini topping.

8 thoughts on “How to Bake Bread in a Steam Oven”