I used to be a risotto person.

By this I mean the kind of person who stands serenely ladling home-made stock into a pot of small-scale-farmed, unpronounceable gourmet rice whilst sipping a chilled glass of wine and discussing the merits of using said (expensive) wine as an ingredient.

My time as a ridiculous food wanker was brought to a fairly abrupt end when this guy came along and I began trying to pass off half a pock-marked zucchini and a slice of questionable ham as dinner (because I’ll do almost anything to avoid a trip to the supermarket with a toddler who is compulsively driven to touch ALL the products in ALL the aisles. Seriously. Every. Single. Thing. Ever). Anyway, I apologise if I made you feel gastronomically inadequate in my earlier life, but it’s all come back around if that makes things any better.

We recently began eating dinner as a family, rather than feeding the kid at 5pm and ourselves somewhere between 7 and 8. The two meals thing was starting to feel wrong for a few reasons, and a shift to 5:30 dinner for everyone has been mostly great, aside from making the grown-up members of our household feel as though we eat at a time previously thought reserved only for residents of retirement homes and hospitals.

I am having one other problem with an earlier and more time-critical dinner. And it is this (be mindful of big fat first world problem alert here): even if I still harbour tendencies of food-wankerism on occasion, having to get a decent meal on the table for everyone when I don’t have a quiet hour beforehand in which to prepare it is enough to wipe those tendencies out. In fact, it’s enough to wipe out the joy of cooking altogether on some days, which makes me sort of sad. Anyone with kids will tell you thinking of and serving up a nutritious and appealing dinner every night is hard, and though I know it to be true, I was (am) still quite attached to the idea of chopping, stirring and serving in one ritualistic time period just before eating. It’s how I unwind from whatever else has happened during the day and changing that routine has thrown me more than I imagined.

Back to the risotto, though. Lest you think I’ve made today’s recipe with the aforementioned zucchini and ham, I assure you I did actually shop before I entered the kitchen. What I did not do was stand at the stove for forty five minutes in order to get dinner on the table. Those days are gone, people.

In this brave new world, one of the things I love about steam oven recipes is that they’re often quicker than their conventional counterparts. In the case of this risotto, I can quickly prepare a few decidedly un-fancy ingredients – much earlier in the day if I am organised enough – scrape them into a tray of rice and stock which has been blipping away in the steam oven for fifteen or so minutes, and produce a very passable approximation of the same dish cooked on the stove, minus some of the effort. This probably won’t win a risotto authenticity award but it also doesn’t require visits to three different gourmet food stores for special rice, diver-caught scallops or region specific Italian wine (though if you’d like to go wine shopping and bring over a bottle for sharing, I’d be just fine with that).

So maybe I am still a risotto person after all, just in a different kind of way than I used to be. I do still love a good esoteric ingredient, and I love a good fancy meal even more, but I’m often more interested in finding those things during an occasional dinner out than I am in making them at home. Let’s face it, lengthy experimental food preparation is far less appealing when there’s a tiny dictator repeatedly ramming toy trucks and trains into your ankles as you attempt not to slop boiling liquid or spitting meat everywhere.

Variations on this dish are limited only by your likes and dislikes. I’ve given the recipe for one of our favourites, but below are a few of the other common things I put in – you can mix and match whatever you like once you’ve got your head around the cooking times for each. Bear in mind the total cooking time for the rice is 20 minutes, though if you add a heaping mound of cold meat or vegetables to the tray you’ll probably need to add an extra 2-3 minutes to allow for the rice to heat up again and keep cooking. Also, we like a lot of our veg on the crunchier end of the scale so adjust accordingly if you prefer things a bit softer.

Other things to try in your risotto: 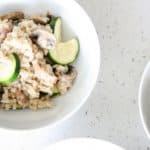 Risotto with pancetta, mushrooms and zucchini

*But I don’t have a steam/combi-steam oven! I’m not going to reinvent the wheel here – there are hundreds, if not thousands, of perfectly good stovetop risotto recipes online and I don’t think I need to give you another one. If you’d like a good starting point, though, maybe try this one.