Sales pitches for combination steam ovens frequently include the assurance that you’ll be able to cook healthier food more easily and quickly.

This is true, but it’s not what we’re going to talk about today, because cooking with steam also has its advantages when making some of the most luxurious and decadent ‘treat’ foods. Think brownies, puddings, breads and pastries – all of which can be done very successfully in a ‘dry’ oven but which benefit enormously from some (or a lot of) steam during baking.

Today’s recipe is similar: making it the regular old way is fine, but if you’re lucky enough to have a combination steam oven you’ll turn it into something so much greater than the sum of its parts. Behold, the Combi Steam Oven French Toast Sandwich. A thing of beauty, no?

To be fair, you may be thinking it doesn’t look all that different from a normal ham and cheese toastie, but you’d be wrong – a combi steam oven renders the whole sandwich almost soufflé-like but without the anxiety-inducing whisking, folding and praying over the oven like you would for regular soufflé.

It’s browned and toasty on the outside, silky underneath and really, really good.

In our house we make French toast sandwiches for dinner because it’s almost too much for breakfast, but I won’t be judging you for eating it any time of day.

Sometimes you need a trick up your sleeve involving pantry staples which can be repurposed into an oozing, cheesy bomb of deeply satisfying comfort food. I wouldn’t recommend it as an everyday food but when nothing except melted cheese will do, this is your new go-to. 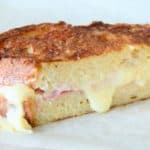 *But I don’t have a steam/combi-steam oven! Cook these all the way through in the frypan. Make sure you use a lower heat so they don’t brown too quickly, and a lid will help a lot with making sure the egg is cooked and ham and cheese are hot enough in the middle.