Every year, around this time, I start to get an avalanche of emails and Facebook messages from people asking how they should cook their Thanksgiving or Christmas turkey in a steam oven.

I’ve rounded up some of the many ways to cook turkey in a steam oven below, but what I really want to share is my favourite method for roasting turkey using my steam oven, so every part of the bird is incredibly juicy and tender. To finish things off perfectly, my turkey has a deep brown maple-glazed skin, which lends a little sweetness and depth to the meat that you won’t get with butter alone.

Before we start out today, I have to confess: I don’t actually roast a whole turkey very often. There are a few reasons for this, but mostly it’s because the weather here during the festive season is hot. And when I say hot, I mean sweltering.

We’ve celebrated many Christmases in 40°C/104°F or more heat, so the idea of a huge bird sitting in the oven and further heating the already-steamy house all day long is too much. Commonly, we have a mostly cold meal with festive salads, glazed and chilled ham, seafood and just one or two hot centrepiece dishes. Some years it’s a perfectly roasted chicken, others it’s a stuffed and rolled turkey breast roast, both of which take far less time to cook than a big turkey (if you like the idea of a stuffed turkey breast in your steam oven, you can find a recipe in my Christmas steam oven cookbook).

I do enjoy the spectacle of a whole gloriously roasted bird* on the table, though, and I know for many of you in the Northern hemisphere it’s a true Thanksgiving and Christmas staple. So this recipe is for you.

*In the spirit of enjoying glorious whole roasted turkeys, let me tell you about the time in my early twenties when I attempted a five-bird roast (like a turducken on steroids, with a quail and a spatchcock put in for good measure). It was the worst experience of my cooking life. I showed up to the fancy butcher on the morning of our big Christmas party to collect the pre-ordered roast, only to discover it was not fresh as expected, but frozen solid. All 10kg (22lb) of it. What ensued was a full day of tending carefully to an icy mass of multiple stuffed birds in the laundry sink, the only place I could fit the thing to continuously run water over the giant frozen orb in hope of defrosting it enough to put into the oven (food safety police look away now). Eventually, hours later, I started cooking it and several more hours later, it came out of the oven and was duly carved. I could not tell you whether it was delicious because after the horror it had inflicted I may have had a few too many cocktails while it roasted. All of our (also very drunk) guests were thrilled, though, and we still laugh about it every year come December. By which I mean everyone else laughs and I cry quietly in embarrassment and shame about my failed beautiful showpiece roast. Ha.

After more delicious combi steam celebration recipes to go with your beautiful turkey? Try these:

I want to remind you, or perhaps explain for the first time if you’re new to this, a few key points to remember when roasting a turkey.

1. Turkey is not chicken.

This is an important thing to know – when they arrive, ready to cook, in your kitchen, they might look like different sizes of the same bird. Don’t be fooled, though.

Turkey meat is denser and more fibrous than chicken. It’s notoriously hard to get right in terms of moisture retention, especially the white meat. That means it’s almost always the case that the white meat cooks long before the dark when you’re roasting a whole bird. This gets more pronounced the larger your bird is.

You can overcome the moisture and uneven cooking issues in several ways. One is simply to cook a smaller turkey (we’ll talk about that below). You can cover or stuff the breast with something fatty (bacon or butter are classics). Perhaps you’d like to joint the bird and cook the different parts separately (good but not as impressive to look at when you bring it to the table). Or you can butterfly the turkey and lay it flat in the oven, which makes cooking more even.

2. Turkey in a steam oven cooks MUCH faster than in a conventional oven.

If you’ve been using a steam oven for any length of time you’ll know it can knock 30 to 50 per cent off the cooking time of your food.

The rule of thumb for conventionally-roasted poultry is 20 minutes per half kilo (or per pound), plus another 20 minutes in total to finish things off. You can throw that timing out the window when it comes to the steam oven: I have cooked a 5kg (11lb) turkey in little over an hour using combination steam. Allowing for 40 minutes resting before carving, that’s half the time I would otherwise need.

The recipe I’m giving you today doesn’t cut down on time as much as if you just used a combi steam setting, because we’re going to steam the turkey first then roast it without steam to finish. It’ll still save you about a third of the conventional time, though, which is fantastic if you’re cooking the entire festive meal and oven space is at a premium.

I cannot stress this enough. If you want the juiciest and best-cooked meat, you need to rely on the internal temperature of the bird rather than a specific cooking time. This is not unique to turkey, by the way. Cooking any meat to temperature eliminates all the guesswork and gives a much more reliable result.

Cooking times vary greatly between oven models and one combi steam oven is not the same as another regarding levels of humidity, temperature accuracy and size (oven size being important because the amount of hot air and steam which circulate around the turkey while cooking will alter how long it takes).

However you’re cooking it, you want the thickest part of your turkey, between the breast and thigh, to cook to a temperature of 73-76⁰C (163-169⁰F). As the meat rests, the temperature should rise to 82-85⁰C (180-185⁰F), which is perfectly cooked. If you don’t have a digital probe thermometer, you can pick one up pretty cheaply online or from any good kitchen supplies store. Splash out for a better one if you’re planning to use it for more than just meat. I would not be without mine, using it for yoghurt making every week, the occasional sous vide experiment and various candies and desserts when time allows.

My favourite way to roast turkey in a steam oven

I’ve tried straight up combi steam, a combination of combi steam and conventional heat, and all sorts of ways to baste, flavour or enhance a whole turkey. Most were pretty successful, but the honour for the best and one of the simplest ways to cook a steam oven turkey goes to a steamed and roasted turkey, which Jacques Pepin shared in the New York Times several years ago.

Pepin’s method has you steam the turkey in a huge pot before transferring to the oven, but if you have a steam oven there’s no transferring necessary, you can just leave the turkey in the same pan for the whole process. What’s actually happening is that you’re steaming the bird, very gently, so it cooks about halfway without losing all that precious moisture. Then you’re finishing it with a conventional (dry) heat to cook through and brown and crisp the skin. If you have a steam-only oven, rather than a combi steam, you don’t miss out – just move the steamed bird into your regular oven for the second part of cooking.

I go for a maple, Dijon mustard and smoky paprika glaze for finishing, which makes the skin beautifully glossy with a great balance of sweet and savoury flavour.

Other recipes and methods to cook turkey in a steam oven

If the steam-then-roast method doesn’t appeal, here are some other tips and recipes you can try out.

Purcell Murray have a turkey-cooking video on their YouTube channel, specific to Thermador steam ovens. If you have a Thermador or Bosch steam oven and want a simple steam oven turkey recipe it’s worth the three-minute watch time.

There is an English Forum Switzerland thread in which one kind person has posted a step by step turkey roasting method for a Miele steam oven.

Here is a very simple and brief post about roasting a turkey in a Wolf steam oven.

If you want something a bit different, Melissa Clark wrote a great-looking recipe for a splayed turkey with herbs. I debated including this one as it requires some adaptation for the steam oven, however it’s so sensible and if you are cooking your bird to temperature you should be able to convert it without too much trouble.

I hope today’s recipe, or one of the suggestions above, gives you the confidence to use your steam oven when roasting your Thanksgiving or Christmas turkey this year. If you’d like to really make the most of your steam oven during the festive period, head over to the shop page and take a look at my instant-download book, Combi Steam Cooking at Christmas, for lots more recipes which are simple to make and impressive to serve. 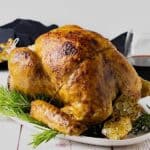 Roasted Turkey in a Steam Oven

Steam the turkey and make the glaze Turkey, steamed and rubbed with butter, ready for roasting.

Would you like more Steam and Bake recipes and steam oven inspiration? Join the mailing list – there’s no spam, just an email every now and then to tell you the latest. When you sign up, you’ll get an invite to the exclusive subscribers-only Combi Steam Cooking Facebook group, which is full of people at all stages of their combi steam journeys, and with many different brands of oven. It’s a friendly, helpful space to learn and share with one another.