I made another little steam oven recipe video to go with this week’s post because it seems you can’t get enough of them! You can view it here.

The past couple of weeks have been what you might call cray-cray at our place what with all the settling into school, daycare and new work schedules. I’ve needed a few meals to satisfy the 5-minute heat and serve factor, and this steam oven cauliflower and pumpkin soup with ginger, lemongrass and coconut fits the bill perfectly.

This recipe is terribly inauthentic in terms of being true to any one cuisine type but I haven’t had any complaints here.

The leeks usually lend themselves to European dishes while the ginger, garlic, lemongrass and turmeric are decidedly South East Asian, as is the coconut milk – though that could also be Pacific Rim, Indian or Caribbean in origin. Take your pick. I don’t think the mish-mash of cuisines matters, as what you end up with here is something warming, cohesive, and full of depth. I love it.

I don’t make all soups in my steam oven, but generally anything I intend to turn into a pureed soup – think root vegetables, cauliflower, sweetcorn, broccoli, peppers or zucchini – goes very well. The flavours of the vegetables get intensified by the humidity and remain soft enough to blend easily, so it’s a great way to cook all your soup vegetables without having to stand and stir a pot to stop things catching before you add the liquid.

In today’s case, I used my biggest cast iron casserole pot to sweat leeks, lemongrass, ginger and garlic at a lower heat before increasing the oven temperature and layering in spices, a head of broken-up cauliflower and some diced pumpkin.

No stirring, just cook until the pumpkin is tender and starting to brown, then puree with stock and coconut milk or cream.

It’s easy, makes a huge batch of soup to keep in your fridge or freezer and there are countless ways to vary the flavour profile.

Don’t like the Asian theme I went with? Try herbs like basil or thyme instead of the ginger/lemongrass/coconut, or drop in a big handful of baby spinach leaves to wilt before pureeing. That’s the nice thing about soup – it’s forgiving and changeable depending on what you have in the fridge.

I really hope today’s post gives you an insight into how easy it is to put together a healthy, hearty soup in your steam oven using the method I’ve followed below. I’d love to hear about it in the comments or on Facebook if you give it a try. 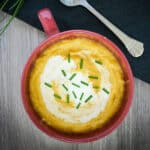 Cauliflower and Pumpkin Soup with Ginger and Lemongrass

But I don’t have a steam/combi-steam oven! You can make this as you would any other soup on the cooktop, though might I suggest you roast the cauliflower and pumpkin rather than boiling them for extra intensity? I’d gently sweat the leek mixture while you roast the vegetables in a 180⁰C oven for about 30 minutes (lightly coat the veg with olive oil before you roast them lest they become dry and tough), then add them to the pot with the liquid, warm through and blend.

After other simple steam oven recipes? If you’re not sick of pumpkin after today’s post, I did something completely different with it a couple of weeks ago and made a Low Carb Pumpkin Loaf. Or maybe some more warming weeknight inspiration is your thing – try the Maple, Lime and Ginger Chicken. And there are lots of other great dinners listed in the Easy Meals index.