These simple little mini pecan pies are something I’ve been making for years. They’re always popular, maybe because a mini dessert that people can just grab and enjoy is less intimidating than cutting slices from a whole large pie? I don’t know, but these two-bite delights are always one of the first things to disappear from the table when the sweet dishes are put out.

Baby pecan pies are also easier and faster to make than a larger pie, so they’re something I turn to often as a last minute recipe when I have to take a share plate for a party.

This recipe is sturdy enough to keep and travel well, so if you have to drive or even fly to a Thanksgiving event over the next few weeks then mini pecan pies could just be the perfect take-along dessert.

I first started baking these as a combi steam oven demonstration dish. My work friend Diane found a similar recipe on a website and we adapted the ingredients and method thinking it would be a great way to show off how nice and fast combi steam baking could be. They were an instant hit and although both of us have long moved on from that job I’ve continued to tweak the recipe into what it is today. On occasion I’ve baked these pies in a regular oven too; they work very well, just give them around 5 minutes extra cooking time.

A standard pie crust is usually made with a classic shortcrust pastry, a mix of butter, flour and perhaps an egg yolk. A well-made shortcrust pastry is excellent but it’s not very forgiving and it can be difficult to work with, especially if you’re a pastry novice.

The easy food-processor crust for these mini pecan pies is a little different. It uses one of my favorite secret ingredients for pastry: cream cheese.

Cream cheese makes pastry more forgiving to mix and to work with. It also adds a nice richness and a slight tang that’s great with very sweet fillings, and it bakes up into a pie crust that’s lovely and tender. No one will notice there’s cream cheese in there, they’ll just tell you that the pastry in those pies is great (and probably ask you for the recipe) which will make you feel all the warm fuzzies about your baking skills.

The other thing I do here which is different (and easier) is that there’s no rolling out and cutting of pastry. Instead you’ll just form the dough into logs and pop it in the fridge for a while, then slice it into little discs which are easy to squash into the patty pan or muffin trays you’ll use to make the pies.

Pecans are obviously the central ingredient for these pies. The rest of the filling is made with pantry staples and mixes up in a minute or two.

A lot of pecan pie fillings use corn syrup as one of the ingredients. I sweeten my filling just with brown sugar, mostly because corn syrup is not that easy to get hold of in my part of the world.

If you like the taste and slightly softer texture that corn syrup gives to pecan pie filling you can definitely add some – just replace a few tablespoons of the brown sugar with corn syrup when you make the filling.

There are a few little tricks I use to make these pies work for me, and to keep them super easy:

Whether for Thanksgiving or just because they look fantastic, I hope a batch or two of this sweet little pie recipe comes out of your steam oven in the near future. You and everyone else who gets to try one will be thrilled you made them. 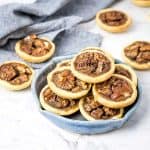