Today I’m going to give you a steam oven recipe for a showpiece Christmas roast which isn’t turkey – it’s much easier and (I think) more delicious, and feels very luxurious with minimal effort. Yep, it’s a glorious, fatty, tender-with-crispy-skin Christmas roast duck, in a combi steam oven.

This post is part 6 in a series of Christmas themed steam oven recipes and ideas. Here are all the others:

Roasting duck in a steam oven

I don’t know why, but roasting a duck seems to strike fear, or at least apprehension, into the heart of many a cook.

Here’s the thing though: if you can roast a chicken, you can roast a duck. And I’d go as far as saying that getting tender meat is even easier with duck because they have built-in self-basting properties thanks to a high proportion of fat. The only down side as far as I can tell is the necessity of cleaning the oven later, because it does get messy.

You might wonder why, with all that fat, you’d need to bother cooking duck in the steam oven – I mean, surely it’ll turn out ok in a regular oven, right?

A regular oven will give you a very acceptable roast duck, but combi steam does a better job at making sure those meat fibres stay extra moist. The lower than usual cooking temperature cooks more gently to start with so the steam does the bulk of the work, and a quick hot blast at the end crisps everything up.

So. 5 ingredients including the duck itself, little more than an hour and you’ll have yourself a very impressive Christmas roast duck, plus the most amazing rendered fat to roast your potatoes* in afterwards. And if you master this for Christmas dinner but want to try it again throughout the year without the festive flavours, you can just switch up the seasoning – I love Chinese 5-spice rubbed over the outside and some halved fresh plums tossed into the tray halfway through cooking so they break down into a soft, silky sauce to accompany the meat. 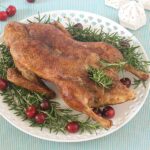 But I don’t have a steam/combi-steam oven! Roast your duck in a regular/fan forced oven at 200⁰C/400⁰F for the entire cooking time. I’d hazard a guess it’ll take around an hour and a half but you’ll need to check it.

*My advice on the potatoes? Once the duck is done, cover it with foil to rest and keep warm. Steam peeled, diced and salted potatoes for 15 minutes at 100⁰C/212⁰F (steam-only) – I leave the steam oven open for a few minutes when I take the duck out to cool it down quickly so I can use the steam-only setting. Once they’re steamed, change the setting to 200⁰C/400⁰F fan-forced (dry heat only, you want the outsides to get as crusty as they can in the next step). Shake the pan to rough up the edges of the potatoes, toss in a spoonful or two of that beautiful duck fat and mix it around, then return the pan to the oven for 25-30 minutes until the potatoes are cooked through with a golden, crunchy crust.

2 thoughts on “Christmas Roast Duck in the combi steam oven”