How to cook bacon. It’s a topic of hot debate for anyone who loves its porky, salty goodness, and everyone has their preferred method.  Today I’m going to share what I think is the best way to cook bacon, which is ridiculously simple and requires minimal effort. It’s exactly the kind of food prep I (and many of you) appreciate.

The title’s a bit of a giveaway, but yes, I’m going to show you how to cook bacon in a steam oven. Whether you want to cook whole slices for breakfast or small diced pieces to stir into another dish, using a combi steam oven to cook bacon is fast and gives the best results I’ve ever had.

Why cook bacon in a steam oven?

You might wonder what the benefit of cooking bacon in a steam oven is, when you could just pan fry some and be done with it. Pan frying is arguably a little faster, but I prefer the steam oven for a few reasons.

Firstly, bacon cooked in the steam oven becomes ultra crisp without any additional fat. You can achieve this with pan fried bacon (or, I’m told, microwaved bacon, if you also like a slightly odd metallic taste along with the porkiness). But where the steam oven version outdoes both of these is in the ratio of crispiness to tender meat.

When you pan fry bacon until it’s very crispy, the meat tends to become dried out and a little leathery. This means you generally have to make a choice between crispy and tender. Steam oven bacon, however, retains the moisture where it counts, giving you bacon that’s crisp and snappy in some parts and tender with just a little chew in others. In short, it’s the best of both worlds.

The other reason I love to cook bacon in my steam oven is because of the low mess and minimal clean up needed. With pan frying, there’s always a halo of grease spatter requiring a full wash and wipe down of my cooktop, plus a fry pan to wash. I have a fry pan which is amazing to cook with but needs to be hand washed, while in the steam oven I use pans which can go through the dishwasher just fine. Dishwasher pans = less clean up effort = winning. If there’s grease splattered around the inside of my steam oven after cooking bacon it’s usually minimal (most spatter stays inside the pan), and a quick wipe with a damp cloth sorts it out.

Should you start bacon in a cold oven or a preheated oven?

Whether you start cooking your bacon in a cold oven or one that’s already hot is down to preference and what’s most convenient for you.

I prefer to put my pan of bacon into a cold oven, where it heats as the oven does. Starting cold helps the fat to render out a little more gently (although it’s less noticeably different than you might think compared to the ‘start hot’ method). It also keeps bacon slices flatter than if you put them into a hot oven.

If I’m cooking diced bacon, or if I’ve been cooking something else and already have the oven on, I just put the pan into a hot oven and don’t worry about it. It’ll cook faster and unless the bacon is very thick cut it’ll still come out tender and fairly evenly cooked.

What to do with steam oven bacon

Though I’m sure you can already think of plenty of ways to use a pan of crispy, salty, bacony delight, here are a few of my favorite uses for it:

Cook slices to put into the sous vide egg bites I shared a few weeks back.

Have a pile of bacon ready to go (it keeps for several days, already cooked, in the fridge) and warm it gently in a regular oven while you make some steamed scrambled eggs.

Pile it atop a Dutch baby pancake with lashings of maple syrup (steam oven Dutch baby recipe available to Patreon members in the June 2019 newsletter). 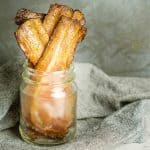 4 thoughts on “How to Cook Bacon in a Steam Oven”