These twice baked potatoes, loaded with bacon, corn and savory seasonings, are a nostalgic favorite and something that was on my childhood dinner table regularly.

These days, I’ve updated the recipe a little from my Mum’s original and adapted it to work in my steam oven so everything cooks much faster. I think you’re going to love them.

What is a twice baked potato?

If you’re unfamiliar with them, twice baked potatoes go something like this:

Roast whole potatoes, then halve and scoop out the creamy flesh, leaving the skins intact for later.

Mix the flesh with delicious extras like bacon, corn, scallions and sour cream.

Pile the dressed up filling back into the skins and give the potatoes a second hit in the oven to turn them into a fluffy, rustic, self contained souffle of sorts.

What could be bad about that?!

Twice baked potatoes are infinitely adaptable so you can add whatever extras you like.

If you don’t eat meat, they can be turned vegetarian (or even vegan, if you drop the cheese). Twice baked potatoes are also a great way to use up small amounts of leftover cooked vegetables, shredded chicken or those ends of different cheeses you can’t figure out what to do with.

You can absolutely bake these potatoes in a regular oven but a steam oven will give you a couple of benefits over a conventional one.

Firstly, roasting a potato in a steam oven is faster. When I roast a very large potato in my regular oven it takes up to an hour and a half. In the steam oven? Forty five minutes to an hour, tops. And the second bake, to heat and melt the cheese on top of your potato halves, only takes about 15 minutes.

The speed of cooking here means a dish that used to take me all afternoon now takes around an hour and a half from start to finish (and an hour of that is pretty hands off). Still not the speediest dinner, but if you make double you’ll be able to get two meals out of one batch.

Creamy flesh makes for a lovely smooth mash which in turn means you end up with a twice baked potato that’s oozy and soft, never grainy.

How to make twice baked potatoes

If you’re making this recipe as a main course, or even a substantial side dish, you’ll want potatoes which are quite large. They’re easier to handle when you’re scooping out the cooked insides and refilling with the seasoned mash later. You can, if you like, make mini twice baked potatoes using baby potatoes (adjusting cooking time to suit), just beware of the extra care you’ll need to take so they don’t break once cooked.

The first thing to do is turn on your oven and get a large baking tray. Prick the potatoes all over with a fork and put them in to roast.

While the potatoes are cooking, I like to prepare the other ingredients: dice the bacon, slice scallions and cut the corn kernels off the cob.

When the potatoes are done, cut them in half and let them cool until you can handle them. Increase your oven temperature and cook the bacon while you wait (just remember to drop the temperature back down again once you take the bacon out of the oven!).

Once you can pick up the potatoes (but while they’re still warm), scoop the flesh from each one. Leave a small border, especially near the top, but don’t panic if it’s not even all the way around, or even if you accidentally tear the skin on a couple of them. That can be patched up later.

Mash sour cream, mustard, horseradish and butter into the potato, then stir in two thirds of the cooked bacon, scallions, corn and a good amount of black pepper. I don’t add salt to these because the bacon is salty enough, but feel free to add some if yours need it.

Spoon all that delicious filling back into the potato halves and top with cheese, then sprinkle the reserved bacon over the top. Bake until the cheese is bubbling and golden, about 15 minutes.

If you wanted to prepare these ahead of time, you could make them right up to the second bake up to 24 hours earlier and store, covered, in the fridge. If you’re doing the second bake from cold just allow a few more minutes for everything to heat up.

Yum! If you’re me, these are fine unadorned, although my hubby has been known to add HP sauce to his (it’s some kind of throwback to his English heritage). A fresh green salad on the side makes these potatoes a hearty and nourishing meal. 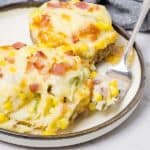