My standards for dinner success are pretty minimal in this period of tiny people and their enormous needs, and this recipe for soy and ginger chicken with rice and vegetables fits the bill when it comes to achievable meals (without making me resort to canned spaghetti or grilled cheese).

In our house, the current requirement is for dinners which are a) simple, b) can be mostly done ahead so they’re ready to quickly cook or reheat at dinner time, and c) adaptable to suit the varying tastes of a spice and chilli-loving husband and a hungry but not so adventurous three year old. And me, though I’ll take dinner any way it comes as long as no-one is throwing a tantrum (the three year old) or crying (the three month old) while it’s eaten.

Tips for adapting steam oven chicken with soy and ginger

First developed when I was doing in-person steam oven demos as a simple way to make a complete meal in the steam oven, this dish has become a home staple.

I mostly make it with chicken tenderloins because they’re quick and don’t need trimming or portioning, but sometimes I’ll do it with diced chicken breast, pork fillets or fish.

The marinade/sauce components can be altered to include, variously, ground Szechuan peppercorns, oyster sauce, coconut cream, peanut butter and chillies. All of them work well (though not all together!).

A Mediterranean version with lemon, garlic, herbs and olive oil (and olives?) would be a winner too, although I am yet to try it.

The dish is all in the timing – if you nail that you’ll forevermore be able to prepare and cook a healthy dinner of rice, protein and veg in your steam oven in 20 minutes flat.

I like to think about the timing as you would for an old-school stove top steamer, where you chuck in the things which take longest first and add those which need less cooking later.

Here, the rice tray goes in first, then chicken and veg, and they all come out together.

I’ve given the recipe using vegetables which take the same time to cook as the chicken, but you can take it one step further and add some faster-cooking veg such as peas or asparagus. Just work out how long you want them to cook for and toss them on top of the meat near the end of cooking time.

Below is the recipe in its simplest iteration – a master recipe, if you will – but feel free to take it in any direction you like – that’s the best kind of dish as far as I’m concerned.

I’ve listed my tried and tested variations at the bottom of the post, feel free to comment if you have any other suggestions. I really hope you’ll give it a go, and that it will give those of you new to steam oven cooking the confidence to experiment with your oven. 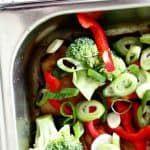 Soy and Ginger Chicken with Steamed Rice and Vegetables