I hope it says something good about this pecan biscotti that I’m munching on it as I type up the final recipe. Stuffed with crunchy pecans, juicy raisins and chunks of chocolate, it’s hands down the best biscotti recipe I’ve ever made. I’m excited to share it with you.

A chocolate biscotti recipe wasn’t even on my radar, to be honest. Though I usually put a nut or cranberry biscotti in the foodie gift boxes I create, I’d never thought to bake a chocolate version of the classic Italian cookie.

Cue author and food stylist Susan Spungen, whose brilliant newsletter I subscribe to (as should you – there’s a free version and a premium paid one that’s worth every cent).

Susan’s chocolate cherry pecan biscotti caught my eye because I had a handful of sour cherries to use up. Turns out I didn’t have enough cherries but by then I was all in. I’m so glad I kept going because we ended up with this. Pecan biscotti with chocolate and raisins.

Tips for baking the best biscotti

I’ve baked a lot of biscotti in my life. In fact, in my twenties I made it in factory quantities to sell to stores! The most popular flavor was cranberry biscotti, and yes, I still bake it today in smaller quantities.

If you’ve never tried it, biscotti is Italian in origin and is a twice baked cookie. The first bake is done as a loaf or log, then the loaf is cooled before being cut into slices and baked again. What you end up with is a crunchy, slightly crumbly cookie with incredible keeping qualities; it’s equally at home dunked into coffee, tea or Vin Santo (dessert wine).

I don’t know if my tips would impress an Italian Nonna, but here are things I’ve found which take biscotti from dry, boring cookies to the kind of treat you can’t pass up.

Are you enjoying this post? If you’d love more Christmas steam oven recipes, check out my cookbook Steam Oven Christmas. It’s a carefully curated collection of the best festive recipes to cook in your steam oven! 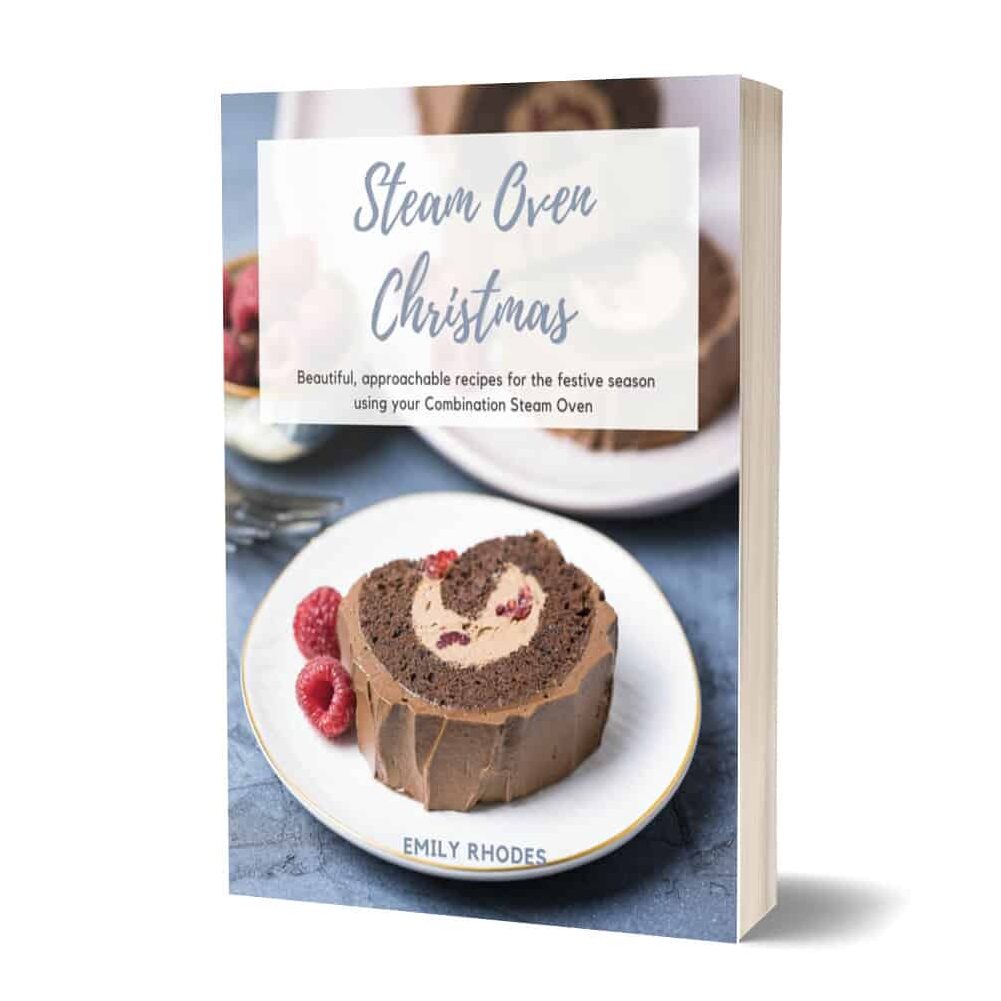 How to make pecan biscotti with chocolate and raisins

The full biscotti recipe and directions are in the printable card at the end of the post. Keep reading for the visual walk through!

Get all your ingredients assembled before you start. This is a simple recipe but it has got numerous ingredients and will move quicker if you’ve gotten everything out.

Start by whisking your dry ingredients in a bowl. Add the pecans (leaving some aside for the next step!), chocolate and raisins and stir to coat all those bits with flour. Set aside.

Put your extra pecans and granulated sugar into a food processor or blender and process to grind the nuts finely.

Tip the pecan/sugar mix into another bowl and add your brown sugar, melted butter, vanilla, whole eggs and egg yolk. Give that a whisk and scrape it into the bowl of dry ingredients.

You’ll need to mix the biscotti dough thoroughly here and it’s hard work because of all the bits. A solid spoon or spatula helps, or you can get into it with your hands if you don’t mind getting sticky. I don’t recommend using a mixer for biscotti because it kind of mashes the inclusions and makes the dough muddy.

Scrape the dough onto a well-floured surface and knead it together a couple of times. If, like me, you find a little pocket of flour at the bottom of the bowl when you scrape it out, you can knead that in now. Split the dough in two and form each into a log roughly 12 inches (30cm) long and 2 inches (5cm) diameter. It’ll expand a lot in the oven so don’t make it too fat unless you want monster cookies.

Put the logs onto a parchment lined baking sheet with a gap of about 2 inches between them. See how floury my biscotti loaves are? That’s ok! You only need to worry if there are big thick blobs of flour, in which case brush them off.

This next step is optional, but you’ll have the egg white sitting around anyway, plus it makes the biscotti pretty for gifting. Lightly beat the white and brush it over the tops of the loaves, then sprinkle very generously with extra granulated sugar or turbinado sugar.

Cook those loaves for 40-45 minutes or until they’re cooked through and ends are just starting to brown. They’ll be like puffy, sugary loaves of bread.

Let the biscotti cool on the baking sheet for about 15 minutes. Not too long or the loaves will be hard to slice.

Use a serrated bread knife to cut slices about 3/8 inch (1cm) thick. Use a sawing action rather than a pressing/crushing action so you cut cleanly through each slice.

Arrange the slices back onto the baking sheet. You can put them close together, though you’ll still need a second baking sheet to fit them all.

Bake the biscotti again, turning halfway through, until they’re toasty and firm. They won’t be crunchy/crispy but will firm up as they cool. My pictured batch got exactly 9 minutes on each side and they were perfect.

That’s it, you’re done! Pecan biscotti isn’t the fastest cookie recipe around, but it’s worth the effort. Now you’ve got dozens of crunchy, crave-worthy little slices of goodness to share around. These will keep in an airtight container for several weeks, or frozen, well wrapped, for up to 6 months. Bet you can’t keep them around that long! 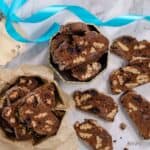 Pecan Biscotti with Chocolate and Raisins