Eggplant, or aubergine, used to be one of those foods I thought I should like, but every time I cooked it I just wondered what all the fuss was about.

It took years to come around, but I eventually discovered I was missing two things to make it sing.

Firstly, oil. Eggplant flesh is like a dry sponge and using a restrained amount of oil to pan fry or roast it is, much to my waistline’s disgust, not worth bothering with. If you aren’t liberal with your fat, the first one or two bits of aubergine the oil hits will suck up every last drop of the stuff, leaving all the other poor pieces to become dry, leathery and grey instead of browned and silky-textured, no matter how long you cook them for.

But. BUT. Here’s the second thing, which really changed my feelings about these giant purple orbs other people always seemed to get so excited about (I hope you know where we’re going with this by now):

Some foods are just made for a steam oven, and eggplants are definitely one of those.

To take you back to the ‘dry sponge’ reference, cooking aubergines with steam means they never have a chance to become dried up and chewy, and renders the flesh soft, yielding and moist – almost creamy. It is definitely the best way I’ve ever found to cook them, and has the not-insignificant added bonus of needing far less fat than any other method requires to make them tasty.

Now I can slice or cube one, drizzle a relatively small quantity of olive oil over the top, throw on some kind of seasoning (maybe za’atar? Or baharat?) and put them in the steam oven on a hot combination steam setting (450⁰F/220⁰C). A handful of diced tomatoes or red peppers added in there won’t hurt either. Twenty minutes later I have a tray of fabulous vegetarian fare, ideal as a side dish at a barbecue or as the star of the show at dinner time with a fried egg laid over the top.

Or, if you want to appease the meat eaters as well, take a little extra time and make these gorgeous stuffed aubergines with lamb, lentils and feta cheese. Lamb, lentils and aubergines are the best of friends and every time I make these I wonder why I’ve left it so long to trot them out. A single half dressed with yoghurt and fresh mint leaves makes an excellent prep-ahead starter if you’re entertaining, though we more often have two each as a single course dinner.

If they’re in season and I can find them, I like to scatter a few pomegranate arils over the finished dish as it adds a sparkly jewel-like colour and slightly acidic fruity pop as you’re eating (ever wondered how to get all those little seeds out of the hard fruit? I like Jamie’s method, though I wouldn’t recommend you do it wearing a white shirt like he is! Ha).

Though the preparation might seem a bit finicky (twice-cooked aubergines, scooping flesh, pan frying, stuffing), none of it is difficult and you can make enough for 2 or 3 meals because they keep for a few days and reheat just as well as if you’d made them fresh. Even if (gasp) instead of using your steam oven, you reheat them in a microwave at work, should you want to do such a thing and make all your colleagues jealous of your bomb kitchen skills**. At any rate, I hope the preparation time won’t put you off, as they’re really worth the effort.

*Probably not a scientific formula, especially if you genuinely don’t like aubergines in any form.

**Though I do not have a regular workplace with a microwave, my husband does. And though his colleagues have long since figured out the bomb kitchen skills where his lunches are concerned may not actually be down to him, they are still jealous (maybe more so given he gets all the benefit with none of the cooking?!). 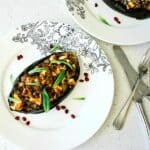 But I don’t have a steam/combi-steam oven! You can make these in a regular oven, but you’ll need to liberally brush the scored aubergine flesh with olive oil before cooking them the first time, otherwise they’ll be spongy and squeaky instead of soft and collapsing. I’d add about 1/3 to 1/2 cup water to the filling before stuffing the skins as it will dry out a bit when you do the second cook. And, when you do the second cook, heat your oven to 200⁰C instead of 180⁰C.

2 thoughts on “Stuffed Eggplant in the Steam Oven”