These Nutella blondies are unashamedly and ridiculously indulgent, so if you’re committed to a low sugar or low fat approach, turn away now.

Blondies are similar to a brownie, but as the name dictates, they’re blond rather than brown. They should have a fudgy, dense texture and they’re generally quite sweet (I’ve actually cut down the sugar in these from the recipe I created years ago, but sugar contributes greatly to the finished texture so it can’t be reduced too much).

Before we get into the intricacies of whether or not sugar is ok, I think it’s worth giving this recipe some perspective by mentioning the philosophy I subscribe to when it comes to eating. It’s this: in general, I’m a big fan of moderation.

I’m aware this means different things to different people, but here it means we cook most of our food from scratch, we pack in as many vegetables and wholefoods as we can and we try not to exclude any food group outright unless someone at the table has a genuine intolerance or allergy.

Moderation, at our house, is about mostly eating nutrient-dense foods but without cutting out all fat, sugar and salt. We eat all three and don’t feel bad about it, I just try to balance what goes on the table so we fill up on nutritious stuff most of the time.

Cooking and eating this way means that every now and then, I have no problem baking and serving up something like a pan of chocolate hazelnut blondies.

If Nutella isn’t your thing, what are you even doing here? Kidding! I know it’s not everyone’s favorite, so if you want to try out these blondies without it, you could mix a cup of good quality chocolate chips into the batter along with the nuts, or even marble in smooth peanut butter for something chocolate free.

These aren’t the only indulgent baked good on this site! Take a look at some other favorites:

Why bake blondies or brownies in a steam oven?

You absolutely don’t have to bake blondies or brownies in a steam oven, but I love that cooking them this way all but guarantees a really dense, fudgy texture.

If I want cake I’ll have cake, but when it comes to these I’m really looking for something that’s not risen or crumbly, more a confection that’s somewhere closer to a soft cookie.

How to make Nutella blondies

The first step in making these is to brown your butter. Technically, you could just melt butter and be done with it, but I love the toastiness you get from taking it a little further until the milk solids turn golden and aromatic. In some dishes the subtlety of brown butter would get swallowed up by the other ingredients, but here it really sings.

To brown the butter, let it melt fully, then come to the boil. Give it a stir every minute or two and let it cook until the bubbles on top turn from giant foamy bubbles to something smaller and more distinct. You’ll be able to smell nutty caramel notes, and the solids will have turned brown.

Take the butter off the heat immediately at this point, and pour it into a heatproof bowl so it stops cooking. There’s a fine line between brown butter and black butter, and the latter will make the blondies bitter.

Next you’ll add the sugars to the hot butter, stirring until the sugar is smooth. It might separate a bit, that’s fine.

If your butter and sugar mix isn’t lukewarm, leave it for a few minutes until it’s cooled down, then add the eggs, vanilla and salt and mix them in thoroughly.

Mix through the flour and toasted nuts, then spread everything into a lined pan.

Obviously, you’re going to need the ubiquitous jar of Italian chocolate hazelnut spread for these blondies. We’re going to marble it across the top of the batter, for which I find it easiest to put the Nutella into a resealable bag with the corner snipped off, then squeeze out thick ribbons of the stuff over the pan. If that sounds too hard, feel free to just dollop spoonfuls on top of the batter instead; it won’t marble as evenly but it works just fine.

Once you’ve got the Nutella on there, use a skewer to drag up, down and across the pan so it creates a pretty pattern. I like my marbling to be a bit random and swirly, but feel free to make it very uniform by dragging the skewer in neat lines if you prefer.

In a warm climate the Nutella should be the right consistency straight from the jar, but if you’re somewhere cooler, just pop the jar into a bowl of hot water for a few minutes until it’s still thick but oozy.

Ready for the oven! These bake up fairly quickly, in around 15 minutes, so don’t go too far. They’re done when the edges are just beginning to brown and the center looks a touch underdone. A skewer won’t test clean unless the blondies are overcooked (don’t do that), so you’ll need to eyeball it and trust your instinct a bit.

Let the blondies cool in the pan, if you can wait that long, then cut into squares for serving. 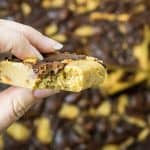