Today’s post on how to roast peppers in a steam oven comes to you as the result of a happy kitchen accident.

A little while back, I needed to roast a few whole red peppers to make a dip, but my regular oven, where I usually grill them, already had something cooking in it.

Lucky for me, I have two ovens, so I figured I’d whack them into the combi steam, using a very hot convection setting with no steam.

I just needed to get the peppers a bit blistered and blackened all over so I could peel off the skins. The more I thought about it, though, the more I thought surely it couldn’t hurt to use the combi steam setting to speed up the process.

Seeing as we’re here, talking about this, you can probably guess what happened next: it worked unbelievably well. The steam didn’t actually speed things up all that much, but it did have a huge benefit over roasted peppers done in a regular oven or over an open flame: the skins peeled away more easily than I’ve ever had them do.

In much the same way as a quick steam or a blanch in boiling water makes fruit and vegetable skins easy to remove, the moisture here has the same effect on roasted peppers, separating skin from flesh with little effort on your part.

Will you get the same charred, smoky effect from your steam oven as you do roasting peppers over a naked flame? Not quite. But if you want a quick and relatively mess-free alternative to the traditional grilling method, I’d really encourage you to try this.

What can you do with roasted peppers?

If you haven’t used roasted peppers much as an ingredient before, you might wonder if it’s worth roasting your own when you could just buy a jar of pre-roasted ones. I’d argue it is, because the taste and texture is so much better. Any leftovers will keep, packed under a layer of olive oil in the refrigerator for about two weeks, and you can use them in all sorts of dishes to add a quick burst of flavour and colour.

I’ll be back in a couple of days with a recipe for a gorgeous Syrian roasted pepper and walnut dip called Muhammara (or Muhmmara, or Mouhammara, depending on who you ask), but here are some other things I like to do with roasted peppers:

·       Slice and cook into omelettes or scrambled eggs

·       Mix with vegetable stock, a little cream and basil pesto to make a 10-minute soup

I hope that’s given you a few ideas to start with, and that you’ll try roasting peppers in your steam oven! Happy steam oven cooking and I’ll see you here again soon. 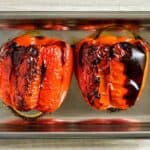 How to Roast Peppers in a Steam Oven

Steam oven roasted peppers, or capsicums, are speedy and so simple. The skins blister and peel away easily and there's no turning over a flame to mess about with.
Cook Time20 mins
Total Time20 mins
Course: Appetizer, Side Dish
Cuisine: Mediterranean, Mexican, Middle Eastern, Spanish
Keyword: how to roast peppers, how to roast peppers in a steam oven
Servings: 2 peppers

Over to you – if you try roasting your peppers in the steam oven I’d love to know how it goes, and what you use them for! Share your pictures on Facebook or tag them #whatsinthesteamoven on Instagram.

Would you like more Steam and Bake recipes and steam oven inspiration? Join the mailing list. When you sign up, you’ll get an invite to the exclusive subscribers-only Combi Steam Cooking Facebook group, which is full of people at all stages of their combi steam journeys, and with many different brands of oven. It’s a friendly, helpful space to learn and share with one another, and I’m always in there answering questions and sharing tips.