Hello! There is definitely a recipe today, for this fantastic chicken, pumpkin and chorizo sheet pan dinner, but I managed to write several hundred words about steam oven recipes in general before I got to it.

I didn’t really mean to climb on my soapbox, but out came the words and although I could delete some I suspect a few of you will be interested. If not, no drama, just scroll on down past my little ramble…

I think it’s pretty clear that I love my steam oven. I mean, it’s why we’re all here in this little corner of the internet, right?! I use it almost every single day and though it’s a very ‘first-world’ thing to say, I can no longer imagine my cooking life without one. Yet there seems, to me at least, to be a disconnect between what we actually want to cook in these great appliances and what the steam oven manufacturers provide us with instructions and recipes for.

Take, for example, many of the recipes provided by Gaggenau, which is often regarded as the gold standard for steam ovens in terms of build and functionality. If your budget allows, they are truly wonderful ovens and can cook pretty much anything fantastically well. But you wouldn’t know it from the recipes provided with the oven at purchase.

I mean, I like a good truffled goose liver terrine as much as the next person (seriously – it sounds pretty delicious despite that horrible photo), but rarely (ok, never) do I have time or occasion to make one. It’s not exactly standard weeknight fare, and nor are most of their other brand-developed recipes.

It’s not all bad news – there are some notable exceptions.

For instance, there are a few solid recipes in the Miele steam oven book (think Moroccan chicken hotpot or sticky banoffee puddings, plus several variants on mashed potatoes) and I really like some of the dishes in the Wolf convection steam recipes collection (pretzel buns, anyone? Or maybe an easy method for pork ribs?).

In general, though, I get a LOT of complaints via email, Facebook and during face to face demonstrations or classes that go along the lines of, “I bought a steam oven/combi steam oven and can’t find any normal recipes which will help me learn to use it”. So if I’m getting so many of those comments in my little part of the world then there must be thousands of others out there thinking the same thing.

I think some of this recipe disconnect comes down to the fact many of the steam oven manufacturers or their parent companies are European and thus develop recipes to suit that climate and overall sensibility. Perhaps what they view as ‘normal’ food just doesn’t work for US/UK/South Asian/Australian audiences, where a lot of steam ovens are now being sold.

Or maybe it’s because it costs companies a lot of money to develop and distribute recipes, so what we’re being offered with our ovens can sometimes be for food which was on trend fifteen or twenty years ago but hasn’t been updated since. Whatever it is, though, it creates a poor user experience for many people. I’d like to think our growing community of steam oven enthusiasts are beginning to address that but we do have a way to go.

You could say today’s dish is a direct response to all those complex, Euro-centric recipes provided by most of our oven manufacturers. I mentioned it on Instagram last week, and it’s so basic it almost doesn’t deserve a recipe, but in the interests of simple weeknight dinners I’m going to write it up for you anyway. Because I think we could all do with a few more simple dinner go-to recipes in our lives, especially when it comes to using these wonderful steam ovens of ours. It’s very adaptable, so I hope you take it and make it your own. 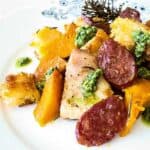 But I don’t have a steam/combi-steam oven! Cook it in a regular oven – you’ll need to drop the temperature to 180⁰C and cook it for maybe 30-35 minutes instead. Don’t skimp on the oil or it will dry out. And I would use skin-on chicken instead of skinless here.