This recipe has been updated and republished on August 15, 2019, from its original 2016 version.

I first made these steam oven sticky beef ribs over a year ago, and at the time I was so excited to share it with you. The simplicity! The tastes-like-so-much-effort-but-takes-so-little smug feeling!

Anyway, I have no idea what happened but it was relegated to the archives of unpublished posts and it’s taken me until now to come back to it. I made it again this week – it was just as good, and just as easy as the first time – and I felt mean for not posting about it earlier.

My 3 year old calls this sticky beef (or, more accurately, ‘sssstickybeef’) and can happily mow through a full adult portion, so it’s safe to say this is a pretty family friendly dinner.

Whatever you call it, this is ridiculously easy to put together, requires almost no attention once it’s in the steam oven (apart from maybe having to top up your water tank if your oven isn’t plumbed) and tastes amazing.

It’s definitely impressive enough to serve to guests, if, unlike us, you actually have people wishing to come to your house around dinnertime. Though it disappoints me, it’s probably not surprising that two tiny and very noisy people with their associated dinner/bath/bedtime routines can put off all but the most intrepid of visitors (ie, those who also have tiny people in their lives and can therefore handle the utter chaos that is 6pm).

Maybe when the less intrepid see this they’ll be more inclined to invite themselves over. And if not, more for us.

How to make sticky beef ribs

If you’re like me, you’ll feel like it’s cheating to put this recipe together. It literally takes me 5 minutes to get it into the oven and I pay it very little attention once it’s there, apart from a couple of turns of the meat. And the payoff is huge: meltingly tender, sticky and savory, and deeply flavored.

Here’s how to do it.

First, get your ingredients together: meat, dark soy sauce, water, brown sugar and a few aromatics. I use very meaty beef ribs which have been left in large pieces, though you could ask your butcher to cut them down into short ribs if you want them to be a little easier to handle and serve.

Put everything except the meat into a baking dish (I use one of my favorite low cast iron casserole pans).

Ginger, garlic, chilli and star anise are classic South East Asian flavors and in this case you can just roughly slice the ginger, squash the garlic with skin still on and throw them all in.

Give it all a stir.

Add the meat and turn to coat it in the marinade. If you have time, put it in the fridge for an hour or two so the flavors really get into the meat.

If you need to get it straight into the oven you can skip the marinating time. I’ve done this a few times and it still comes out deeply flavored and delicious.

Put the marinated meat into a cold oven, turn it on and cook, turning occasionally so the meat is evenly coated in the sauce during cooking, until it’s falling of the bone and shreds easily.

For larger ribs like this I usually allow 3-3 1/2 hours, if they’re cut down into short ribs they’ll take around an hour less.

The finished dish will be very dark and quite saucy, which is exactly what you want.

The fat and sinew in the meat will have melted down and you’ll have a reasonable layer of fat on top of the sauce by the end of cooking. I find the easiest way to deal with this is to remove the meat carefully and set aside, then spoon off most of the fat before returning the meat to the dish for serving.

And there you have it! Gloriously sticky and saucy beef ribs, slow cooked in far less than the usual time in your steam oven. 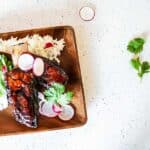 But I don’t have a steam/combi-steam oven! Put it in your slow cooker. You may want to brown the meat first, and cook for around 6 hours, but otherwise it should come out pretty similar.