I’ve helped people work out how to make individual Christmas puddings in their steam ovens for years, but until now I haven’t written about them here.

Honestly, I figured that for people in the UK, Australia or New Zealand, this most classic of Christmas desserts was something everyone has their favorite recipe for, so I couldn’t provide much guidance except with cooking times. Yet every year, although I’ve shared a less-traditional steamed pudding which remains popular, I get requests to share my best classic pudding recipe, so here we are.

I have to confess to this not actually being wholly my recipe. It’s based on one from the great (and sadly late, as of this year) Margaret Fulton, whose prolific recipes and writing on Australian cooking over the past 60 years or so did more to establish a national food identity than anyone else I can think of.

Fulton’s recipe is a very traditional one for a single large pudding, and I’ve tweaked it slightly over the years to change the fruit and turn it into single serve puddings which cook in a quarter of the time.

The best fruit to use in Christmas pudding

I’ve seen pudding recipes calling for just about every dried or candied fruit under the sun, and others which simply use currants and raisins. In my mind, though, the real classics contain a mix of mostly dried vine fruits with a little mixed citrus peel.

While I like the traditional approach, I can never help but change things a little to suit my own tastes, and, if I’m honest, to lighten my puddings just a touch in a nod to the hot climate here at Christmas. For Northern hemisphere festivities I think the deep, dark puddings of old are welcome, but in a place where the temperature regularly tops 35 or 40 degrees Celsius (95-105°F) on Christmas day it’s a bit much.

The lovely thing about the recipe below is that you can adapt the dried fruit as much as you like to suit where you live or your taste preferences, given three rules:

Firstly, make sure the total fruit weight remains the same. Second, make sure at least half the weight is vine fruits, which will will keep that traditional pudding taste and some depth of color. And third, cut any larger fruits into pieces roughly the size of a sultana so they mix and cook evenly.

If you’re wondering about the exact fruits I’ve used in the photographed puddings: I go with half vine fruits (an even mix, or 135g each, of sultanas, currants and raisins), then make up the weight with equal quantities of candied ginger, apricots, candied orange slices, prunes and dried cranberries (80g each).

We’ve discussed the best fruit to use, but there are a few other tricks worth knowing to get the best out of your pudding making.

After you’ve made your puddings, they’ll benefit a lot from some time to mature. Kind of like humans, ha.

Puddings are traditionally made on the last Sunday in November (stir-up Sunday), but a little later is absolutely fine. They’ll be good to eat a few days after making, but better if you can give them a few weeks.

To age your puddings, wrap them in wax paper and store in an airtight container. If you like a brandy or liqueur-soaked pudding, unwrap them every few days and brush with a little alcohol to build that depth of flavor (this also helps greatly with their keeping qualities).

If you’re in a warm climate like me, store puddings in the fridge for maturing. In a cold climate they’ll be fine in a cool pantry. And if you’re really getting ahead and need to store them for longer than a few weeks, I’d recommend wrapping in cling film and foil, then freezing, where they’ll happily sit for up to a year.

To reheat, steam individual puddings (uncovered) at 212°F/100°C on your oven’s steam setting for 30 minutes. If you’ve made a larger pudding instead of single serves, you’ll need to steam it for around an hour and a half to two hours (leave it in the pudding basin for this and turn out to serve). 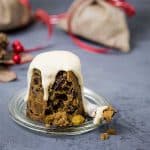