I wonder if I should be concerned that in the past few weeks I have posted not one, not two, but now THREE steam oven recipes for ‘things which are good on toast’.

It’s not that I don’t think we could all do with more easy and delicious things to top our toast with (I for one could never tire of a crackly browned slice of sourdough topped with pretty much anything), more that I suspect you may begin to think all I eat is toast. Which would be sad given I’m a girl who creates recipes for a living.

But you see, the thing is, I have been testing a lot of recipes for the steam oven cookbook (does anyone else think this book needs a name already?! I know I do). So many recipes. And though that sounds like it would be the best thing ever, after several weeks of a constant parade of varyingly successful test dishes for breakfast, lunch and dinner, I get tired of analysing every dish for highlights and faults, and plain old eggs or some variant of mashed veg dolloped onto something carb-laden starts to look really enticing. In fact it’s just the sort of comforting, unthinking food I crave pretty much all of the time, but especially when I’m feeling a bit burnt out in the kitchen.

So, carrot hummus. This was one of the first things my big kid ate beyond pure mashed vegetables, though he won’t go near it now and it looks like his little brother isn’t going to either if this batch was anything to go by. More for me, I say (although really, after the joy of the first one who ate EVERYTHING, have I been landed with a baby who will not put anything except toast and rice cakes in his mouth?! It’s soul destroying).

I’ve been making this recipe for a few years – it’s a barely adapted version of one from my favourite vegetable cookbook, River Cottage Veg Everyday – which, incidentally, I think might be my favourite not just because it has lots of truly great recipes, but also because it is written by someone who actually loves meat and isn’t intent on selling me on the benefits of a purely plant based diet. It’s a refreshing departure from many vegetarian cookbooks. Anyway, this hummus is one of three from the book – I have been meaning to try the beetroot and walnut version too but this one keeps winning the ‘I have everything in the pantry or fridge’ race, and it’s so good that I’m not tired of it in the least.

Basically, the recipe has you toss a big stack of carrots with a dressing made of oil, spices, honey and garlic, roast it and puree the lot with citrus juice and tahini. Easy, and done in the steam oven the carrots take on an earthy intensity and sweetness you will never get from a conventional roasted carrot. Plus, combi steaming them means I can get away with using less oil here, because they stay quite moist and soft. The finished dip is a beautifully balanced mix of earthy, sweet, sour and spice which keeps for several days in the fridge and freezes pretty well too. Apart from slathering it on toast, we’ve been known to spread it on barbecued lamb cutlets, use it as a side with roasted vegetables, put a smear on the plate under a fried egg and (mostly) just scoop it straight from the fridge onto pita chips or crackers. I hope you might do one or all of the same. 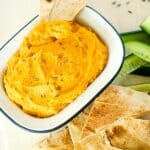 The hummus will keep, refrigerated, for up to a few days. It also freezes really well. I freeze single sized snack containers of it ready to pop into lunchboxes, where they’ll thaw ready to eat by lunchtime.

But I don’t have a steam/combi-steam oven! Roast the carrots in a conventional oven at 180⁰C for about 40 minutes. Don’t skimp on the oil, you may need a bit more than stated above so they don’t go leathery in the oven, and if things are looking a bit dry when you’re pureeing the dip, add an extra couple of tablespoons to the processor too.